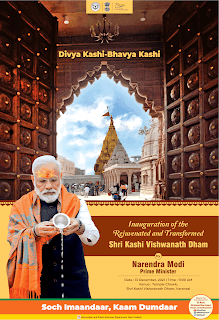 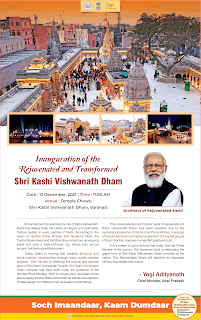 Prime Minister Narendra Modi will inaugurate Kashi Vishwanath Dham corridor amid the chanting of ‘Shivarchan’ at sanctum sanctorum of the Kashi Vishwanath Temple in the presence of 3000 religious, spiritual gurus, priests of southern Shaivism sects and other dignitaries, including Chief Minister Yogi Adityanath and several other CMs of the BJP-governed states, on Monday.

“Tomorrow, 13th December is a landmark day. At a special programme in Kashi, the Shri Kashi Vishwanath Dham project will be inaugurated. This will add to Kashi’s spiritual vibrancy. I would urge you all to join tomorrow’s programme,” the PM tweeted on the eve of the launch.

The Rs 900-crore project which has a 400-meter long and 75-meter wide corridor will connect the Kashi Vishwanath temple with three main ghats of the Ganga. The stretch has 24 newly constructed buildings to provide top-class amenities to pilgrims.

“An outcome of the PM’s vision for Kashi, the corridor facilitates hassle-free movement of pilgrims between Ganga and the temple and paves way for development of not only Varanasi, but the entire Purvanchal region, enhancing tourism as well as business and trade and creating employment opportunities for youth from the region,” said a Kashi Vishwanath Temple official.

“Prior to the construction of this corridor, the KV temple lacked direct access from the Ganga and devotees had to negotiate through narrow and congested lanes to reach the temple,” he said, adding “the corridor gives Kashi a new identity of a clean and smart city while retaining its ancient cultural and spiritual heritage.”

“To host the PM and other dignitaries for the opening of KVD corridor, all necessary preparations including floral decoration of the temple, Mandir Chowk and other buildings in its vicinity as well as the 400-meter corridor area from Lalita Ghat to temple has been completed,” divisional commissioner and chairman of Shri Kashi Vishwanath Special Area Development Board, Deepak Agrawal said.

CM Yogi has already reached Varanasi to oversee the preparations for the mega event. All the ghats would be lit with diyas for the next three days while citizens will illuminate their houses to give the city a festive look.

Regarding the rituals to be performed by the PM, KVT chief priest Pt Shrikant Mishra said, “After reaching Lalita Ghat by boat, the PM will fetch Ganga Jal and move towards KVT on foot.PM will directly reach KVT’s sanctum sanctorum where amid chanting of Vedic Mantra by three priests, he will perform the rituals of Shivarchan to mark the opening of KVD.”

From the KVT, the PM will reach Mandir Chowk amid blowing of conch shells and sounds of ‘damru’ to address the gathering of seers from different parts of country.