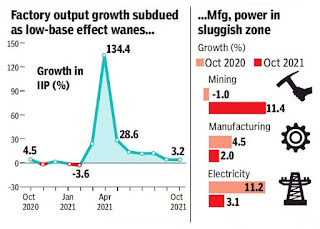 Industrial output growth slowed down to 3.2% in October due to a sharp moderation in manufacturing activity, raising concerns that the economic revival was losing steam as was also seen in some of the other indicators.

While the increase in the index of industrial production hovered around September 2021 level of 3.3%, it had slowed from the 4.5% reading in October 2020.

Apart from manufacturing, which grew 2%, electricity too witnessed a 3.1% expansion with mining being the sole sector posting a strong growth. The numbers threw up a few other worrying trends as the capital goods segment witnessed a contraction of 1.1% in October, while consumer durables output fell over 6%, the second straight month of decline, largely due to chip shortage impacting automobile deliveries. Consumer nondurables just about managed to stay in the black with 0.5% increase in output.

The numbers indicated that the festival season boost was negated by some of the supply side issues and the low growth phenomenon in the sector is not seen to be going away immediately, especially with the government acknowledging that chip shortage will persist.

The government is seen to be pushing for a capex boost to ensure that there is sufficient demand for inputs such a cement and steel.