Mumbai: BMC to free pavements of all hurdles 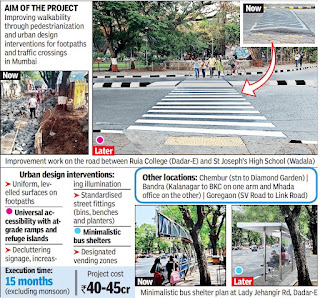 One can soon expect better footpaths, street furniture and bus-stops in the suburbs. After a pilot project in south Mumbai, the BMC has initiated work on improving the walkability quotient in the suburbs. The work will significantly benefit pedestrians and the differently-abled as it aims at universal accessibility.

Currently, at Dadar (E), the stretch between Ruia College and St Joseph's High School (Wadala) is being improved through interventions like minimalistic bus shelters, standardized street furniture, universal accessibility with atgrade crossings, ramps and median refuge. “Walking is a big part of our community," said Parsi Colony resident Kayomi Engineer. “Ours is a predominantly residential area with a large population of elders. With better pavements and protected pedestrian crossings, senior citizens will be able to get around easily. In developed countries, parents are seen moving their child's stroller around comfortably on streets, but in Mumbai, it's a nightmare as footpaths are uneven or broken. Post-pandemic, it will be important for people to use public spaces in the right way," she added. Corporator Amey Ghole said the project will enhance walkability in the Wadala-Parsi Colony-Matunga belt.

Data with the traffic police shows that 42% of all road crash deaths last year were of pedestrians. “When more than 50% of all journeys in the city are done on foot, pedestrians deserve better. For instance, pedestrian crossings should be marked after every 400-500 metre stretch,” said AV Shenoy of Mumbai Mobility Forum.

Additional municipal commissioner P Velrasu said officers have been directed to take up work at a 100 metre stretch in each area so that pedestrian movement is not affected. “Once the work is completed in totality, the next portion along the same stretch would be dug up. We are focusing on improving the pedestrian experience by trying to make use of only those things that would be low on maintenance and long-lasting," he said.

Conservation architect Pankaj Joshi, who is a consultant for the project, said a concreting technique called castin-situ concrete is being used on the footpaths as it is longlasting. "We are also placing data ducts below these stretches so that telecom companies wanting to excavate for laying of fiber optic cables do not tamper with the entire footpath. Joshi said precast street furniture would also be used as a part of the project so that there are no chances of them being vandalized.