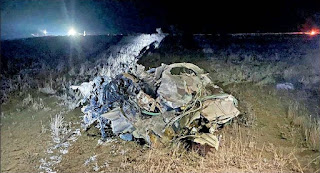 In yet another MiG-21 crash in the IAF, another pilot was killed after his fighter went down in Jaisalmer on Friday evening.

The MiG-21 crashed near Sudasiri village near the India-Pakistan border around 8.30 pm. Some eyewitnesses said the jet caught fire in the air and crashed with a major explosion, with the debris being spread over a one km area. The pilot, identified as Wing Commander Harshit Sinha, did not get a chance to eject from the plane. The IAF has ordered a court of inquiry to establish the exact reason behind the crash, said an official.

Five MiG-21s have crashed this year, with three pilots being killed in them. On March 17, a highly-experienced pilot, Group Captain Ashish Gupta, posted at IAF’s `Top-Gun’ school Tactics and Air Combat Development Establishment at Gwalior, was killed when his MiG-21 crashed soon after taking off from the Gwalior airbase.

Another pilot, Squadron Leader Abhinav Choudhary (28), was killed when his MiG-21 `Bison’, which had taken off from the Suratgarh airbase in Rajasthan for a “routine night combat training sortie, crashed on May 20.