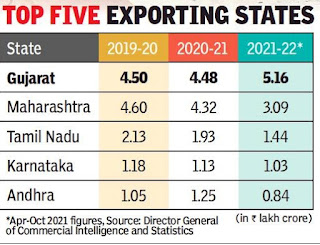 Exports from Gujarat have touched a record high, crossing the Rs 5 lakh crore mark for the first time ever. Importantly, the feat has been achieved in the first half of 2021-22.

Experts believe that the annual exports from the state were likely to cross Rs nine lakh crore this fiscal.

Gujarat had been exporting goods worth about Rs 4.50 lakh crore annually. However, in the current financial year, the exports have touched Rs 5.16 lakh crore in the first six months (April to October), which is a 118% jump compared to the same period last year. A senior official of the commerce ministry said the main reason for the higher export figures of Gujarat was due to the GST regime.

“The major reason for the higher exports is the GST regime. Goods manufactured in Gujarat and exported from Mumbai were earlier counted as export of Maharashtra. But now, after the successful implementation of GST, the state of origin is now correctly recorded,” he said.

According to the figures released by the Director General of Commercial Intelligence and Statistics, working under the commerce ministry, Gujarat pipped Maharashtra in 2020-21 itself.

The business community however says that it is not only the recording of the correct state of origin, but exports itself has increased.