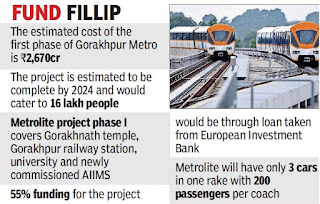 Gorakhpur metrolite project got a fillip after the Public Investment Board cleared the first phase of the project at a meeting chaired by Union finance secretary and expenditure in New Delhi last week. On Wednesday, CM Yogi Adityanath took to Twitter to thank PM Modi for the approval.

According to sources, the estimated cost of the first phase is Rs 2,670.37 crore. That translates into a per km cost of about Rs 167.8 crore due to elevated stations. The project is estimated to be complete by 2024 and cater to 15.75 lakh estimated population. Nearly 55% cost of the project would be covered by a soft loan taken from EIB, while the rest of the cost would be shared by the center and state government in a 60:40 ratio.

“The 55% of the funding which would be through loan will be taken from European investment bank, which had also funded Lucknow and Kanpur Metro projects. Approval for Agra Metro and Gorakhpur Metrolite Project is awaited from EIB,” said a source.

Gorakhpur Metro is an advanced Light Rail Transit project. Under the New Metro Policy, 2017 the Detailed Project Report for the Gorakhpur Metro has been prepared by RITES in Coordination with UPMRC. The project was approved by the Uttar Pradesh Government on October 9, 2020 for two corridors and was sent to the central government for further approval.

Now approved by the PIB, the project will be put forward to the Union cabinet for approval. This advanced LRT will be different from the traditional rolling stocks; it will have only three cars (with 200 passengers per coach capacity) with a 12 ton load on axle with a width of 2.65 meters. Small stations have been considered as the most optimal solution for one fully elevated corridor.