Petrol cheaper by ₹8.56/l in Delhi after VAT cut 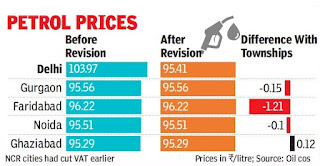 The AAP government slashed VAT (value added tax) on petrol from 30% to 19.4%, marking the steepest-ever tax reduction on the fuel that will reduce pump price by Rs 8.56 per litre from Thursday and stop flight of business to neighbouring UP and Haryana.

The reduction in VAT on petrol will bring down the fuel’s cost to Rs 95.41 per litre in the capital from Rs 103.97, provided the pump prices remain unchanged as they have been for the last 28 days. The AAP government had on May 5, 2020 raised VAT on petrol by 3% to 30% with a view to raise revenue for funding measures against Covid-19.

The revised petrol price in Delhi will be cheaper by 10 paise a litre than Noida and 15 paise than Gurgaon and Rs 1.21 than Faridabad. But it will be costlier by 12 paise than Ghaziabad. The prices in these neighbouring townships differ due to difference in freight charges.

“We have made petrol very cheap in Delhi from today. VAT rates have been reduced from 30% to 19.4%. Petrol and diesel will be cheaper in Delhi as compared to other cities of NCR. I hope this step will bring huge relief to the people of Delhi from inflation,” chief minister Arvind Kejriwal tweeted.

Delhi’s diesel prices are already the cheapest in NCR at Rs 86.67 per litre while the rates in Noida and Gurgaon are Rs.87.01 and Rs.87.11 per litre, respectively.

Welcoming the Kejriwal government’s move, oil minister Hardeep Singh Puri tweeted, "Happy that non-BJP states are also following the example set by the Central Govt. I again appeal to the remaining 6 non-BJP states to reduce VAT on fuel & bring relief to the people".

Traders welcomed the move. Brijesh Goyal, chairman of the Chamber of Trade and Industry, an organisation of traders, said a group of petrol pump owners had written a letter to the Delhi government requesting it to cut VAT. "The sale of petrol pump dealers was going down because petrol price was higher in the capital compared with NCR towns while diesel prices were comparable. It will help increase sales for these traders," said Goyal.

The Centre had on November 3 slashed excise duty on petrol by Rs 5 a litre and diesel by Rs 10. After UP and Haryana reduced VAT, their petrol pumps in Delhi’s vicinity started drawing the capital’s vehicle owners. More than a quarter of Delhi’s 403 petrol pumps, which are located on or near the border with UP and Haryana, particularly saw a dramatic drop in sales.