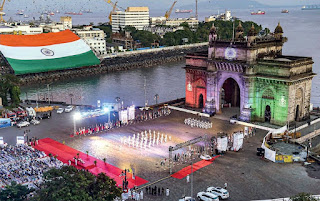 The Western Naval Command of the Indian Navy exhibited the world’s largest national flag at Mumbai’s Naval Dockyard, overlooking the iconic Gateway of India, on Navy Day, as part of ‘Azadi ka Amrit Mahotsav’ on Saturday. The flag measured 225 feet in length and 150 feet in width and weighed about 1400 kgs and is made of khadi and was manufactured in 49 days with 70 Khadi artisans to prepare this flag.

A defence spokesperson said the Indian national flag has been conceptualized and manufactured by the Khadi and Village Industries and Commission as part of the ‘Azadi ka Amrit Mahotsav.’ The Indian Navy rededicates itself to the service of the nation on Navy Day, it renews its pledge and commitment to protect and promote national interests and serve the people of India through this small but important gesture of exhibiting the monumental national flag.

A spokesperson for Khadi and Village Industries Commission said the monumental national flag has been conceptualized and prepared by them to celebrate the 75 years of India’s independence. KVIC has handed over the flag to the defence forces for displaying the same at prominent places on historic occasions. “The flag was unveiled on Gandhi Jayanti (October 2) this year at a hilltop in Leh. It was later on displayed at Hindon Airbase on the occasion of Air Force Day on October 8 and at the Red Fort on October 21, which marked the completion of 100 crore Covid vaccinations in India. KVIC Chairman, Vinai Kumar Saxena lauded the efforts of the defence personnel in displaying the flag at different places. “The flag has created nearly 3500-man hours of additional work for Khadi artisans and allied workers. A whopping 4500 meters of handspun, hand-woven Khadi cotton bunting has been used in making the flag,” he said.