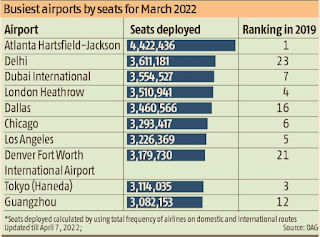 Indira Gandhi International Airport has emerged as the world’s second busiest airport in March in terms of total seat capacity and frequency of domestic and international flights, according to a leading global travel data provider.

In the previous ranking issued by Official Airline Guide for February, the Delhi airport had ranked third after Atlanta Hartsfield-Jackson International Airport and Dubai International Airport. The airport has also made a quantum leap compared with its position in April 2019. Before the Covid-19 pandemic, the airport ranked 23rd among the busiest airports in the world.

After remaining affected due to the pandemic for about two years, the travel and aviation sectors have slowly started to show signs of recovery.

“Travel restrictions had badly affected the travel and tourism sectors for two consecutive years. But now, with the rise in the number of vaccinated people, governments are easing travel restrictions. India last month opened its borders and allowed the entry of fully vaccinated international travellers into the country. These steps have largely helped the travel and tourism industry,” said Videh Kumar Jaipuriar, CEO-DIAL.