In 8 years, no reason to hang head in shame : PM Modi 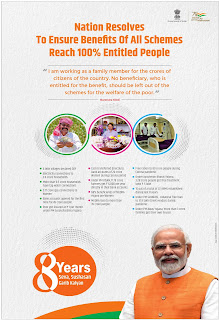 Prime Minister Narendra Modi summed up his eight years in office so far as a relentless pursuit of the India envisioned by Mahatma Gandhi and Sardar Vallabhbhai Patel, without once allowing or doing— even if inadvertently— anything that would “make citizens of the country hang their heads in shame”.

“Mahatma Gandhi wanted an India in which the poor, Dalits, Adivasis and women are empowered; cleanliness and health are a way of life, and the economy is based on swadeshi (local) solutions,” he told a gathering at the inauguration of the KD Paravadiya Multispeciality Hospital at Atkot, about 55km from Rajkot.

“In the past eight years, I have spared no effort to serve the nation. . . My government has provided over three crore pucca houses to the poor, toilets to more than 10 crore families, cooking gas cylinders to over nine crore women, electricity connection to over 2.5 crore poor families, piped water (Nal Se Jal) to more than six crore families, free medical treatment up to Rs 5 lakh to over 50 crore Indians,” he said.