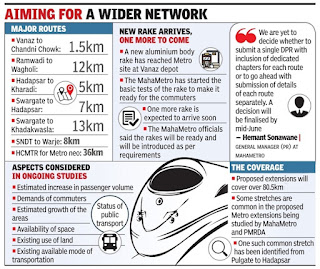 The ongoing study of various proposed Metro extensions in Pune and Pimpri Chinchwad is in the advanced stage, and the MahaMetro is eyeing completion of a detailed project report by July.

There are six major routes under the assessment, besides a study to introduce Metro-neo services on high capacity mass transit route.

MahaMetro officials said their teams were working simultaneously on all the routes and the studies will get over in phases. The MahaMetro will either submit the reports to PMC in a phased manner or produce the entire document of all the routes through a single DPR in July.

“We are yet to decide whether to submit a single DPR with inclusion of dedicated chapters for each route or to go ahead with submission of details of each route separately. A decision will be finalised by mid-June,” said Hemant Sonawane, the general manager (PR) at MahaMetro.

Sonawane said various aspects are being considered in the ongoing studies, including the estimated increase in passenger volume, demands of the commuters, estimated growth of the areas and technical aspects such as availability of space, existing use of land, existing available mode of transportation and status of public transport.

“We have also sought feedback from people of different age groups, professions, students, entrepreneurs to get an idea of the commute on all the routes,” another official with the MahaMetro said.

The proposed extensions will cover over 80.5km. It has been observed that some stretches are common in the proposed Metro extensions being studied by the MahaMetro and PMRDA. The officials with the civic administration said it has been decided that both studies will be taken into consideration while finalising the execution plan. One such common stretch has been identified from Pulgate to Hadapsar.

“Since the extensions are proposed on various routes, possibility of common stretches cannot be denied. We are putting an effort to avoid confusions, while executing the projects and work out the best suitable option,” the official said.