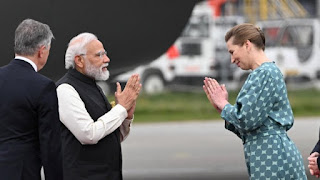 In joint remarks following the summit, Modi said he and Frederiksen called for an immediate ceasefire in the Russia-Ukraine war, and that the path of dialogue and diplomacy should be used to resolve the conflict. The two leaders also stressed on ensuring a “free, open and inclusive” Indo-Pacific region.

“We stressed on ensuring a free, open, inclusive and rules-based Indo-Pacific region. We called for an immediate ceasefire in Ukraine and the path of dialogue and diplomacy to resolve the problem,” Modi said. Frederiksen said as close partners, she discussed the Ukraine war with Modi. Condemning the war, she said Denmark and the EU were strongly against Russia’s unlawful and ‘unprovoked’ invasion of Ukraine. “My message is very clear: Putin has to stop this war and end the killings. I hope that India will influence Russia also in this discussion,” she said.

The two leaders also discussed consequences of war crimes committed against civilians and the humanitarian crisis in Ukraine.

“The reports on killings of civilians in Bucha are deeply shocking. We have condemned these killings and we stress the need for an independent investigation,” she said.

The two leaders held talks in a one-on-one format, followed by delegation level talks, after Modi arrived at the Danish capital on Tuesday in the second leg of his three-day, three-nation European tour. The PMs reviewed progress of the India-Denmark Green Strategic Partnership. Discussions covered cooperation in renewable energy, especially offshore wind energy and green hydrogen, as well as skill development, health, shipping, water and the Arctic, among others.

The two shared convergence of interest on the importance of climate action, green growth and energy diversification. The two leaders agreed to strengthen cooperation in renewable energy.