The Delimitation Commission on Jammu and Kashmir notifies Final Report 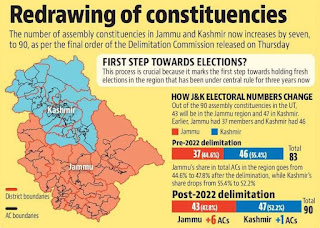 The Delimitation Commission on Jammu and Kashmir, formed in March 2020, on Thursday notified its final report.

Based on the representations made by Kashmiri migrants and displaced persons from Pakistan-occupied J&K seeking presence in the J&K assembly, citing their past persecution and forced life in exile over the last three decades, the Delimitation Commission recommended that two nominated seats be created for the Kashmiri migrant community with voting rights.

The fresh changes in the delimitation draft were approved on Wednesday by the commission after considering the suggestions and objections of the public, political representatives and other stakeholders during public hearings conducted by the panel in Jammu and Srinagar on April 4 and 5. This delimitation is final and cannot be challenged in any court of law.

The delimitation award has been finalised in two years and two months. The central government will now notify the date from which the delimitation order will take effect.

The EC will then take up electoral roll revisions and rationalisation of polling stations according to the redrawn constituencies. These processes, which would require a few months, must be completed for assembly polls to be held.

Among the key changes in the delimitation order vis a vis the March 2022 delimitation draft are revision in names of 13 assembly constituencies (ACs), including seven in Jammu division and six in Kashmir. In Srinagar, Zoonimar AC will now be called Zadibal AC. In Anantnag district, Bijbehra AC has been renamed as Srigufwara-Bijbehra AC. Similarly, in Baramulla district, Kunzar AC will be rechristened as Wagoora-Kreeri, Tangmarg AC as Gulmarg AC and Rohama-Rafiabad AC as Rafiabad AC.