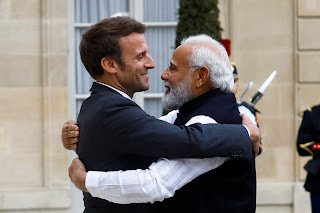 “PM @narendramodi and President @EmmanuelMacron meet in Paris. This meeting will add momentum to the India-France friendship,” the Prime Minister's Office tweeted along with a photograph of Modi and Macron hugging each other.

Macron held a tete-a-tete with Modi before the delegation-level talks at the Elysee Palace the official residence of the French President.

“A meeting between two friends. An opportunity to translate the renewed mandate of President @EmmanuelMacron into a renewed momentum for the India-France Strategic partnership,” Ministry of External Affairs spokesperson Arindam Bagchi tweeted. Modi, who arrived here from Denmark on the final leg of his three-nation Europe tour, will hold extensive talks with Macron, who was re-elected to the top post over a week back.

His visit comes amid the Ukraine crisis, which has united much of Europe against Russia. The two leaders are also expected to discuss how to ensure cessation of hostilities in Ukraine. On Tuesday, Macron spoke with his Russian counterpart Vladimir Putin and urged Moscow to rise as a permanent member of the US Security Council by ending devastating aggression.