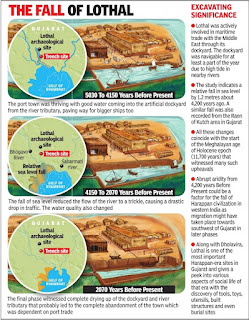 Was it only the dry spell or changing weather patterns that brought about the decline of metropolises such as Lothal in the Harappan period? A recent study highlighted that a major receding of the sea level about 4,200 years ago which dried up the famed dockyard at Lothal could be one of the reasons for the decline of the port town. Lothal is believed to be the oldest surviving port in the world. It is also the site where a museum on maritime history of India is being constructed.

The paper titled ‘Evidence for seawater retreat with advent of Meghalayan era (~4200 years before present or BP) in a coastal Harappan settlement’ has been published online recently in the AGU journal Geochemistry, Geophysics, Geosystems. The authors are Archana Das and others from Institute of Seismological Research and the researchers from Birbal Sahni Institute of Palaeosciences.

“The last 4,200 years are identified as the Meghalayan Age by geologists. At the start of the period, we see major climatic shifts that impacted contemporary human habitations,” said Siddharth Prizomwala of ISR. “The de-urbanization of the Harappan civilization coincides with the phase from 4,200 to 3,800 years before present. The age is known to have begun with recurring monsoonal droughts. ”

Prizomwala added: “Our study also indicates that it was the period marked by rapid drop in sea levels in coastal southwestern Gujarat. It could have had an adverse impact on Lothal. ” The study employed the analysis of sediments from a trench at Lothal in the ancient dockyard area. The researchers studied carbon and sulphur contents and their stable isotopes along with shells of foraminifera (a marine microorganism) and sand grains for radiocarbon and optical dating.

Agnihotri added that the third phase also indicated dry conditions, whereas the fourth one is of the present day.

The early phase showed organisms thriving in marine environments. Later part shows brackish water organisms, indicating the presence of both seawater and freshwater at the site. From about 2,000 years ago, the place remained dry as it is observed today. “Our study clearly provides multi-proxy evidence for a relative sea level fall during the initial phase of the Meghalayan age (~4150 to ~3625 years BP). This relative sea level fall might have dried up the ancient Lothal site, the oldest Harappan dockyard,” the paper said.