ULPIN project rollout likely in Maharashtra in end of June 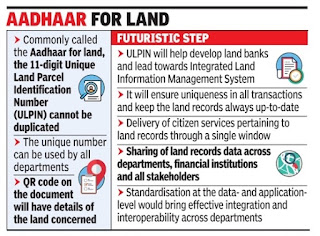 The state is likely to roll out the Unique Land Parcel Identification Number project by the end of June. Commonly called the Aadhaar for land, an 11-digit number would be attributed to all the land parcels in urban and rural areas in the state. It would help in identifying every surveyed land parcel and preventing fraud related to land. The state has given an “in principle” approval to the project and the final clearance is awaited. “We are waiting for the technical fine-tuning of the software at the National Informatics Centre. The approval of the proposal is under consideration of the government,” said state settlement commissioner NK Sudhanshu on Friday.

Nearly 3.26 crore land parcels in the state would have this unique number, which would include 2.56 crore 7x12 extracts and 70 lakh city survey property cards.

Sarita Narke, the state coordinator of the Digital India Land Records Modernisation Programme of the revenue department, said the department had generated the requisite numbers for both urban and rural land parcels. She said around 4,000 crore numbers were reserved for rural areas and another 6,000 crore for urban areas for transactions in future.

Narke said these numbers would be displayed on the right side of the document. They would also have QR codes comprising all details of land parcels.

The state initially wants to issue the unique numbers and then add the remaining details like the longitudinal and latitudinal data.

“The digits will be unique to an existing property. If the property changes either through subdivision or amalgamation, the ULPIN will change. The trail of the changes would be maintained,” Narke added. The state is taking into consideration all future usage of connecting government departments for information related to land. Citizen facilitation and ease of access was at the core of this concept development, said a source in the government.

Union finance minister Nirmala Sitharaman in her budget speech mentioned ULPIN and encouraged all states to roll it out. Pilot projects were carried out in Maharashtra as well as in Haryana, Bihar, Odisha, Jharkhand, Andhra Pradesh, Gujarat, Sikkim, Goa, Madhya Pradesh and Karnataka.