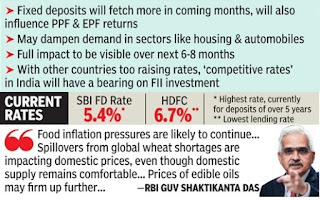 In a surprise move, the Reserve Bank of India announced an increase in key interest rates by 40 basis points, the first increase since August 2018 and the sharpest in nearly 11 years, as it shifted gears to tame surging prices.

Rising prices against the backdrop of the war in Ukraine and breakdown of supply chains have emerged as a key policy challenge, prompting central banks around the world to raise interest and tackle soaring prices. Home loans and other retail loans as well as those availed of by businesses will get costlier as around 40% bank credit is linked to the repo rate, which is what banks earn on the overnight funds that they park with the RBI. The monetary policy committee also increased the cash reserve ratio (share of deposits banks keep with RBI) by 50 basis points to 4.5% to suck out some cash from the system. The repo rate has been revised to 4.4%. A 40-basis-point increase (100 basis points equal one percentage point) in key policy rates will raise the EMI on a Rs 1-crore home loan of a 15-year tenure by Rs 2,176.

The decision sent the market crashing with the sensex closing 1307 points lower. Between the time the RBI governor’s statement started and market closed, the index fell 900 points.

Hardening of both retail and wholesale inflation above the central bank’s tolerance level has
prompted the RBI to go in for a sudden rate hike aimed at protecting the growth recovery under way and shield consumers from the impact of surging prices of fuel and food. “Globally, inflation is rising alarmingly and spreading fast. Geopolitical tensions are ratcheting up inflation to their highest levels in the last 3 to 4 decades in major economies while moderating external demand. Global
crude oil prices are ruling above $100 per barrel and remain volatile. Global food prices touched a new record in March and have firmed up even further since then. Inflation-sensitive items relevant to India, such as edible oils, are facing shortages due to the conflict in Europe and export bans by key producers. The jump in fertiliser prices and other input costs has a direct impact on food prices in India,” RBI governor Shaktikanta Das said.
The central bank’s announcement came barely hours before the US Federal Reserve was set to raise rates, the first such hike since 2000. The Indian central bank’s move surprised the market as the monetary policy committee headed by RBI governor decided not to wait for the next meeting until June and advanced the announcement. Besides, the quantum of the increase was higher than the anticipated rise of 25 basis points.
The rate hike is, however, seen as a positive for the rupee. Higher rates make Indian debt more attractive to foreign investors.
Wednesday’s hike reverses RBI’s off-cycle 40-basis-point cut announced in the wake of the pandemic in May 2020. Bankers expect the RBI to raise rates by 100 basis points this year, which leaves room for an additional 60 basis points.
Following the announcement, other lending facilities, including the standing deposit facility and marginal standing facility, which are linked to the repo rate, will also rise.
All home loans, which are linked to the repo rate, will become costlier by 40 basis points. Some of the older loans are linked to the marginal cost of lending rates, which are already going up.
While equity markets always react negatively to interest rate hikes as they are seen to be growth-inhibiting, the RBI said that the rate hike would be growth positive as it would protect savings, investment, competitiveness and output growth.