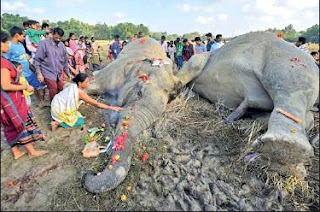 Data collected by conservationists has revealed that 40 elephants have died in Assam in the last 100 days. All of them were killed due to unnatural causes, with the primary reasons being mowing down by moving train, electrocution, poisoning, and accidentally falling in ditches, especially in tea garden areas.

Herds of elephants have been regularly invading human settlements in search of food, damaging houses and crops in the process. As a result, incidents of man-animal conflict are steadily rising.

While rhinos in the state are confined to national parks and wildlife sanctuaries, there is an estimated population of 500 elephants in habitats across all reserved forests in Assam. The state has five elephant reserves covering an estimated area of 10,967-sq km.

Only a small portion of these reserves are in protected areas, in the form of national parks or wildlife sanctuaries, while the rest are reserved forest areas.

Conservationists pointed out that elephant reserves in the state do not enjoy the same level of protection as national parks.

They fear the large-scale deforestation of elephant habitats, which lie outside protected areas, has endangered the survival of elephants.