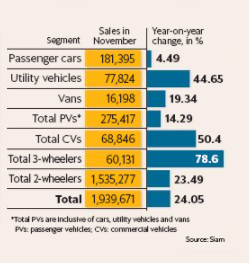 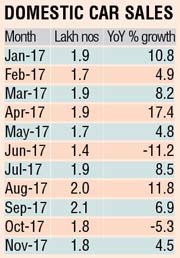 The sales of automobiles showed an impressive growth across segments in the month of November due to a low base as the year-ago period had witnessed demonetisation of high-value currency notes.

The cumulative vehicle sales across categories registered a rise of 24.05% during November in comparison to the corresponding period last year.

The note ban announced in November affected the industry for several weeks, hitting demand as a significant percentage of purchases in semi-urban and rural areas are made in cash.

As per the statistics from automotive companies and SIAM, the passenger vehicle sales in India rose 14.29% on year to 275,417 units last month, helped by robust demand for utility vehicles as well as discounts. Car sales increased 4.49% to 181,395 units.

With the overall automobile sales, including PVs, commercial vehicles and two-wheelers recording a 9.29% growth during the April-November period this fiscal, SIAM expects the overall industry growth to be around 8-10% during the current financial year.

Sales of commercial vehicles, which is witnessing a cyclic revival in recent times, witnessed an increase of 50.43% to 68,846 units.