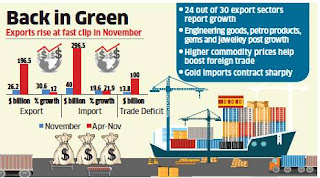 India’s exports rose at a fast clip in November, reversing the contraction in the previous month and allaying concerns that lingering issues with the GST will dent shipments.

In dollar terms the value of exports was $26.2 billion against imports of $40 billion, yielding a trade gap of $13.8 billion, higher than $13.4 billion same month last year but less than $14 billion in October.

Elevated commodity prices suggest that the trade deficit may continue to print in double digits.

Exports have grown for the last 13-month except for one contraction of 1.12% in October.

The high exports growth was driven by bigger shipments of gems and jewellery and engineering goods and helped by the low base of last year.

As many as 24 out of 30 exports groups posted positive growth in November.

Exporters’ body FIEO said that the global demand has surprised with its strength.

FIEO hoped the problems in GST refund would also be mitigated in the days to come to ease out liquidity for exporters. Gold imports dropped 26% to $3.26 billion but higher crude prices pushed up overall imports. Petroleum, crude and products imports were up 39.1% to $9.6 billion. 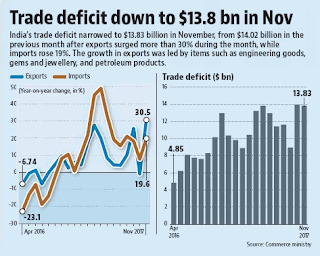