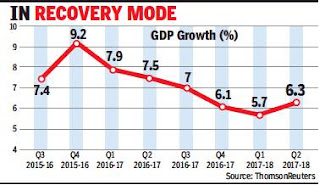 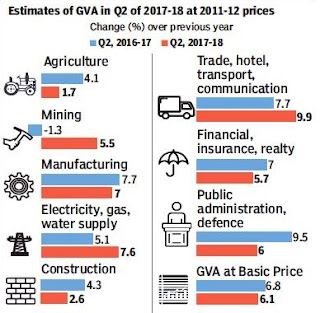 India’s growth staged a recovery in the September quarter as the economy emerged from the shadows of the impact of demonetisation and rollout issues linked to the Goods & Services Tax, prompting the government to say that it was poised for a durable recovery in the months ahead.

Data released showed that the economy grew 6.3% in July-September—the second quarter of the current fiscal year— faster than the June quarter’s 5.7% expansion, led by robust manufacturing. It helped break the cycle of 5 consecutive quarters of slowing growth.

Growth had slowed to a three-year low in Q1as the impact of demonetisation and GST implementation issues hurt expansion and troubled businesses, providing enough ammunition to critics to attack the Narendra Modi government for its handling of the economy.

Since then a raft of positive news has lifted sentiment.

India improved its ranking significantly in the World Bank’s Ease of Doing Business survey while Moody’s Investor Services upgraded the country’s sovereign rating. Another agency S&P kept the rating and the outlook unchanged but applauded the reform measures unleashed by the government which it said should help boost growth in the coming months.

The upbeat GDP data comes in the midst of the Gujarat assembly poll campaigning where opposition parties have sought to use the slowdown narrative to attack the BJP. The rebound in growth is expected to act as a major boost for the BJP and help reassert PM Narendra Modi’s reformist credentials.

The 6.3% growth in the September quarter has helped break the cycle of five quarters of slowing growth.

Economists pointed to several positive signals such as a good kharif crop, boost in manufacturing due to GST concessions. They expect growth to be closer to 7% for the full year. The sluggishness in the farm sector emerged as a concern. The farm sector grew 1.7% in the September quarter, slower than the previous quarter’s 2.3%.