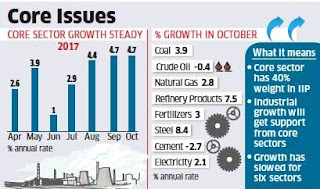 The country’s eight core infrastructure industries grew 4.7% in October, matching the September growth, which has been revised down from 5.2%. This is the highest core sector growth since March 2017.

April-October growth stood at 3.5%, down from 5.6% in the corresponding period last year.

Six of the eight industries included in the core sector recorded a sequential deterioration in growth, but that was offset by pick up in output of steel and fertilisers.

Steel production rose 8.4% and was followed closely by refinery products that reported 7.5% growth.

The other industries in core sector are electricity, fertilisers, refinery products, natural gas, and coal.

The core sector industries have a 40% weigh in the Index of Industrial Production.