E-goods made in India pull ahead of imports 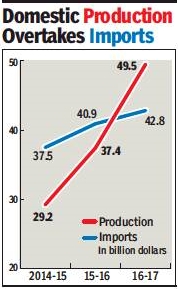 The Centre’s efforts to promote local manufacturing through the ‘Make in India’ programme seem to be reaping dividends with the domestic production of electronics — one of the key reasons behind foreign currency spends after oil — moving ahead of imports for the first time in 2016-17.

Domestic electronics production in 2016-17 stood at $49.5 billion, higher than the near $43 billion spent on imports.

The government has taken a number of steps to boost manufacturing of electronics, particularly of smartphones, appliances, set-top boxes and televisions. A majority of imports in many of these areas are coming from neighbouring China, something India is now trying to counter through fiscal incentives and other measures.

The local benefits were reinforced recently when the customs duty on import of a variety of products was raised earlier this month. This was for products such as mobile phones, set-top boxes, microwave ovens, and LED lamps.

The growth in local manufacturing has been strong over the past three financial years as imports are moderating. In 2015-16, the local production was $37.4 billion against imports of $41 billion, while in 2014-15, electronics goods worth around $30 billion were made in India against $37.5 billion sourced from overseas. The government plans to give a massive push to digital activities and achieve a turnover of $1 trillion by 2022. Manufacturing of electronics is seen as a major contributor towards meeting this target.