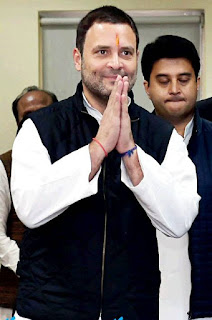 The Congress set the ball rolling for a generational shift in its top leadership with Rahul Gandhi becoming the only candidate to file his nomination papers for the post of the party’s president before deadline expired.

Blessed and accompanied by a host of senior party leaders like former Prime Minister Manmohan Singh, Sushil Kumar Shinde, former Delhi CM Sheila Dikshit, Mohsina Kidwai, Oscar Fernandes and Ambika Soni, Rahul, who has been the party’s vice president for over four years since 2013, filed his papers before the party’s Central Election Committee. His mother and incumbent Congress president Sonia Gandhi did not accompany him but proposed his name as an AICC delegate.

Karnataka CM Siddaramaiah, his Punjab and Meghalaya counterparts, Capt Amarinder Singh and Mukul Sangma, respectively, were present during the nomination filing ritual. Himachal CM Virbhadra was away in Kerala, where he is undergoing treatment. Senior leader AK Anthony, who is in hospital because of a brain stroke, was also missed. Digvijay Singh, however, was not spotted.

The party’s election authority later announced that around 89 sets of nomination papers had been filed, which means that 890 delegates backed Rahul. Five sets of papers were filed by 48 AICC office-bearers.

The 47-year-old Gandhi scion is most likely to take over the party’s reins from Sonia on December 11, two days after his mother’s birthday on December 9. The last date for withdrawal of nomination papers is December 11. Scrutiny of the nomination will take place on Tuesday.

By evening, a string of Congress leaders took to twitter to welcome Rahul’s nomination and imminent coronation. From Ahmed Patel to Ajay Maken to Siddaramaiah, everyone began hailing his leadership. While Patel wished Rahul “all the best for his future endeavours,” the Karnataka CM expressed confidence that the “party would renew itself with greater vigour and scale new heights” under Rahul’s leadership.

Rajya Sabha deputy leader Anand Sharma said the party has been waiting for Rahul’s elevation since he was appointed vice president in January 2013. “It is a historic moment,” he said.

Terming Rahul Gandhi as a “capable” leader, Leader of Opposition in the Rajya Sabha Ghulam Nabi Azad exuded confidence that he will turn out to be a “very successful” leader. “And under his leadership, the Congress will regain power,” Azad added.

An air of euphoria hung on 24 Akbar Road amid expectations that the Congress would win the Gujarat elections.

Party leaders described Rahul as the “most suited for the job” as he has known party cadres in almost all 30 states /UTs since he took over as general secretary in 2007. “He must be knowing at least 50 people in each state,” said RC Khuntia, AICC in charge for Telangana.

The best compliment, however, perhaps came from Manmohan Singh.“Rahulji has been the darling of the Congress...Rahul Gandhi will carry on the great traditions of the Congress party,” said the normally taciturn Singh.

Before filing his nominations, Rahul also sought the blessings of former President and Congress veteran Pranab Mukherjee. It was Mukherjee, who put a tilak on his forehead. Initial rumours — stirred by the BJP — were that Rahul had visited a temple in Delhi before going to file his nomination papers.