BJP sweeps civic polls in UP 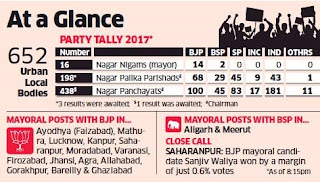 Support for the BJP in urban areas, which helped the party score a landslide win in the UP state polls earlier this year, appears to have survived the grouses arising over the implementation of GST, with the party sweeping 14 out of 16 mayoral seats in the state.

However, the BSP showed signs of a comeback by snatching two seats from the BJP, while the SP and the Congress failed to open their account. Congress lost badly in Amethi, Rahul Gandhi’s LS seat.

The BJP won three newly created civic corporations—Ayodhya-Faizabad, Mathura-Vrindavan and Saharanpur —and also in Muslim-dominated cities such as Moradabad, Bareilly and Firozabad.

BJP also won in Agra, frequently referred to as the “Dalit capital” because of the big concentration of Dalits it boasts of. The resounding victory at the expense of Congress and other rivals comes on the eve of Gujarat polls and should act as a morale-booster for BJP. Prime Minister Narendra Modi and BJP chief Amit Shah hailed the ‘thumbs-up’ from the UP electorate, the third consecutive one since its massive victory in the 2014 Lok Sabha polls. BJP’s strength in UP, which has 80 Lok Sabha seats will be key to its attempt to retain power in 2019.

The reaffirmation in the urban centres, almost all of them with sizeable presence of traders, should also reassure the party which is having to deal with Congress’s attempt to stoke grouses against GST.

The results suggest a revival of sorts for BSP, especially in western UP, where electoral collaboration between Dalits — core constituents — and Muslims prevailed against BJP in Aligarh and Meerut and can politically resuscitate party supremo Mayawati, who appeared to be facing an existential crisis. But by underlining its potential as a possible BJP-beater, BSP has created complications also for SP and Congress, especially considering the trend among Muslims to switch their support to whoever is in the best position to defeat the Hindutva outfit. While for Congress, the rout only adds to its string of humiliations, SP is in the spotlight for failing to open its account. It has been defeated in its strongholds by BJP, say analysts. SP chief Akhilesh Yadav is facing criticism for not campaigning and for a “casual” approach to politics.