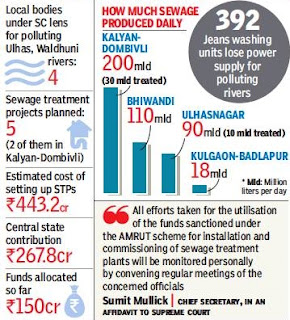 To give a fresh lease of life to Ulhas and Waldhuni rivers, the Maharashtra state government has released Rs.101.34 crore to set up sewage treatment plants by four urban civic bodies that are under the Supreme Court lens for discharging untreated sewage into the two water bodies. Informing the apex court about the release of funds, chief secretary Sumit Mullick, in an affidavit, also said that the government has disconnected electricity supply to 392 jeans washing units that were polluting the rivers.

Last month, the state government had taken an undertaking to release Rs.100 crore in three phases for the “purpose of sewage treatment and for bringing Ulhas and Waldhuni rivers hopefully back to their natural state”. Going one step ahead, the state government has now sanctioned the funds at one go to speed up the much-delayed infrastructure work.

The affidavit said that “joint secretary urban development department vide letter no…. dated 7th December informedthat thefund of Rs.101.34 crore has been released under AMRUT scheme for the sewage treatment plants of the Kalyan Dombivli municipal corporation, Ulhasnagar municipal corporation, Ambernath municipal council and Kulgaon-Badlapur municipal council.’’With this the state has released totally Rs.150.14 crore for setting up STPs. The cost of the STPs is estimated to be Rs.443.18 crore, of which the central and state share is Rs.267.78 crore.

A big chunk (Rs.51.66 crore) will go to KDMC’s sewage-I and KDMC sewage-II projects. KDMC, which is the biggest among the four local bodies, treated just 20.37% of its total 216 MLD of sewage.

The chief secretary has also given a personal undertaking to monitoring the projects. “I say and submit that all efforts taken for the utilisation of the aforesaid funds sanctioned under the AMRUT scheme for installation and commissioning of sewage treatment plants will be monitored personally by convening regular meetings of the concerned officials,’’ he said in his affidavit.