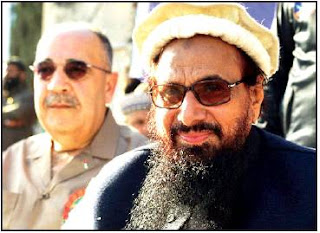 India slammed Palestine for its ambassador in Pakistan sharing stage with JuD chief and LeT founder Hafiz Saeed at a rally in Rawalpindi.

The presence of the Palestinian envoy at a JuD rally is a slap on the face for India, which last week voted for a United Nations General Assembly resolution against the US decision to recognise Jerusalem as the capital of Israel.

Pictures of the Palestinian ambassador to Pakistan, Waleed Abu Ali, circulated on social media after he reportedly attended a rally organised by Difah-e-Pakistan Council in Liaquat Bagh in Rawalpindi. Difah-e-Pakistan Council is an umbrella group of 40 religious and extremist groups in Pakistan, headed by Saeed, who is banned as a global terrorist by the UN and is the mastermind of the 26/11 attacks in Mumbai. Saeed used the rally to call for an “Islamic summit” to defend Jerusalem from Israel.

India, like 127 other countries, voted on the principle that the status of Jerusalem would be decided after a deal between Israel and Palestine. India’s vote was seen to be against Israel, a close friend, as well as the US, a strategic partner.

The Narendra Modi government came under some criticism from its own supporters, who thought India had let its friends down. The Israeli government, too, registered its protest against the Indian vote.

Not only has Palestine President Mahmoud Abbas visited India earlier this year on a state visit, Modi is expected to visit Palestine in the coming months.

Palestine, however, has consistently voted against India on the Kashmir issue both in the UN and in the OIC for years while criticising New Delhi’s growing relationship with Israel. India, therefore, has no choice but to take a grim view of the Palestine envoy’s actions.