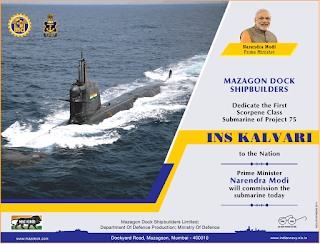 India has taken a major step forward to complete its nuclear weapons triad by commissioning its first small nuclear-powered submarine armed with nuclear-tipped ballistic missiles called INS Arihant last year, to add to the existing Agni land missiles and fighter-bombers, but its old conventional underwater combat arm has been a huge worry for the last several years.

So, when the PM commissions India’s first new diesel-electric submarine in over 17 years in Mumbai on Thursday, it will be a red-letter day for the beleaguered Navy. The force, after all, is grappling with just 13 ageing conventional submarines, only half of them operational at any given time.

The new 1,565-tonne submarine, INS Kalvari (tiger shark, a deadly deep-sea predator), after the first-ever submarine inducted by India from Russia in December 1967, is to be followed by five of her Scorpene sisters under the Rs.23,652 crore “Project-75” underway at Mazagon Docks in collaboration with France. The Scorpene project, of course, has faced huge time and cost overruns.

The submarine, which has aspeed of 20 knots, is equipped with sea-skimming SM-39 Exocet missiles and heavy-weight wire-guided surface and underwater target torpedoes.

The Navy is also keen to kick-start the long-delayed “Project-75-India” for construction of six new stealth submarines, with both land-attack missile capabilities and air-independent propulsion.  India needs 18 diesel-electric and six nuclear attack submarines, backed by four SSBNs armed with long-range ballistic missiles, to guard against a two-front threat scenario, from China and Pakistan, as well as achieve credible nuclear deterrence. 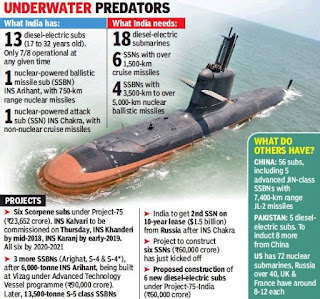