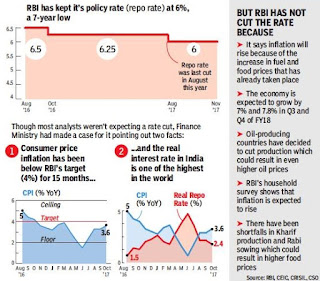 The Reserve Bank of India’s Monetary Policy Committee voted to keep rates on hold, citing inflation and improved growth prospects for the economy. The MPC said in its statement that, while inflation was expected to be marginally more than envisaged in October 2017, growth as measured by gross value added would improve to 7% and 7.8% in Q3-FY18 and Q4-FY18 respectively.

As a result of MPC’s decision, the policy repo rate (the rate at which RBI lends to banks) remains unchanged at 6% and the reverse repo rate at 5.75%. In its fifth bi-monthly policy statement, the RBI said several significant recent developments augur well for growth. However, banks need to buttress them by passing on earlier rate cuts to borrowers.

Although actual growth in the second quarter has turned out to be 0.3 percentage points lower than RBI’s forecast, the policy has focused on the improved growth prospects and retained its GVA forecast for FY18 at 6.7% with risks evenly balanced. Among the positive developments, the RBI has highlighted the pickup in bank credit, surge in initial public offerings, improvement in ease of doing business and movement in the resolution of bad loans.

The RBI’s decision to keep rates on hold also appears to have been influenced by steady inflation expectations. In the MPC, all three members from the RBI — governor Patel, deputy governor Viraj Acharya, and executive director Michael Patra voted to hold rates. Of the external members, Chetan Ghate and Pami Dua supported the RBI view, while Ravindra H Dholakia voted for a policy rate reduction of 25 bps.

According to the RBI, inflation, which was seen to be easing in the first quarter of FY18, has by and large reversed and there is a risk that this upward trajectory may continue in the near term. The other factors that would push up prices in the second half were a delayed impact of the increase in housing rent allowance for government employees and the decision of oil-producing countries to impose cuts.