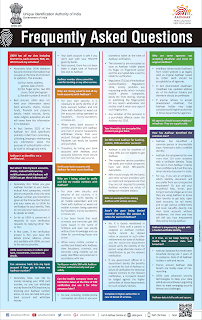 In a move intended to offer major relief to older people whose fingerprints and irises are unclear, Aadhaar will now allow face recognition along with biometrics as a means of authentication of users.

The decision comes less than a week after the Unique Identification Authority of India sought to address privacy concerns by offering the option of creating virtual IDs that mask the actual unique identification number of an individual during an UID-authenticated transaction and just ahead of the apex court hearing the challenge to the use of the Aadhaar system.

To be made available by July 1, the face authentication option will be allowed in combination with fingerprints or iris or OTP to verify the details of Aadhaar users and is expected to go a long way in dealing with problems faced by older users with blurred biometrics. Interestingly, the authentication will require some facial movement like blinking or smiling to ensure a live presence of the user.

Face authentication will not require any new reference data as photos of citizens are already on the Aadhaar database. The objective is to increase inclusiveness of the system so that genuine beneficiaries of government benefits like pensioners are not denied their dues.

“This is a landmark development which will go a long way in helping people in authentication in a secured manner, particularly whose fingerprints have worn out because of old age or manual work,” UIDAI CEO Ajay Bhusan Pandey said. He said the ‘liveness’ detection will provide additional security.

The new method will also be allowed “on need basis” for those who face problems in carrying out Aadhaar-related transactions.

A recent Niti Aayog commissioned report had found that farmers found fingerprinting a problem while accessing fertiliser subsidy under the Aadhaar authenticated system.

A UIDAI statement said face authentication would be allowed “only in fusion mode”, meaning along with either fingerprint or iris or OTP to verify the details of the Aadhaar holder.

Aadhaar number is being used for identity authentication across banks, telecom companies, public distribution system, income tax among others. The use can be gauged from the fact that an average four crore authentications are being done on a daily basis.

The move to allow face authentication came within a week of UIDAI allowing residents to use a 16-digit temporary virtual ID to avoid sharing their 12-digit UID number when accessing government benefits and other services in a bid to protect privacy.

“This facility is going to help in inclusive authentication of those who are not able to biometrically authenticate due to their worn out fingerprints, old age or hard work conditions,” the UIDAI statement said.

To facilitate the new authentication service, the Aadhaar issuing body will work with biometric device providers to integrate face modality into the registered devices.

It will also line up software development kits that will have the ability to capture face image, check liveness and create digitally signed and encrypted authentication input.

As many as 119 crore biometric identifiers have been issued so far, and Aadhaar is being used as an identity proof of people by various government and private agencies and for verifying bank accounts and PANs to weed out black money and bring unaccounted wealth to book.