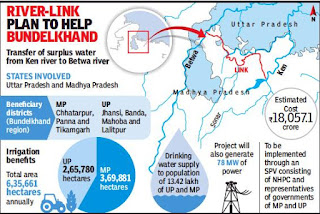 Seeking to quickly set in motion implementation of its ambitious Ken-Betwa river-linking project, the Centre has decided to fund 90% of its cost of over Rs.18,000 crore and planned to get its foundation stone laid by PM Narendra Modi by March.

The plan is to implement the major part of the project in three years so that people of the parched Bundelkhand region of Uttar Pradesh and Madhya Pradesh start getting its benefits before the country celebrates 75 years of its independence in 2022.

The Centre’s intent was announced by Union water resources minister Nitin Gadkari at a function on Wednesday where he asserted that the PM would visit Bundelkhand within two months and lay the foundation stone of the project.

“We will try to ensure its implementation within the next three years and free the Bundelkhand region from the drought-like situation,” said Gadkari, adding 90% of the project cost would be shared by the central government.