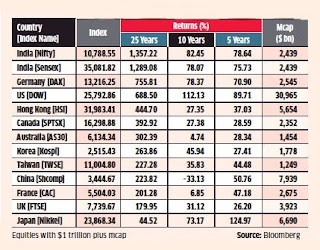 India is the best performing equity market in the past 25 years among $1-trillion plus markets, outpacing some of the bigwigs in the developed world such as the US, Germany and Hong Kong. The Sensex has returned 1,289% in local currency compar with Dow Jones’ 690% and 756% Germany’s DAX in the period.

The stellar performance Indian markets has been driven by strong flows from foreign investors, who have been mostly bullish on the country since the economic liberalisation of 1991.

The performance of some bluechips like Reliance Industries and ITC standout. RIL has returned 5,675% in 25 years while tobacco major ITC has risen 5,096% during this period.