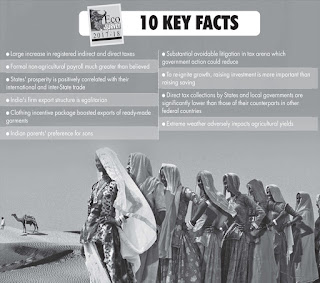 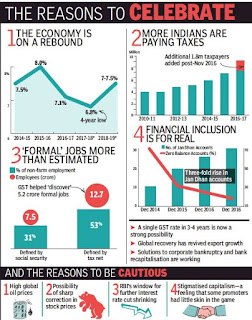 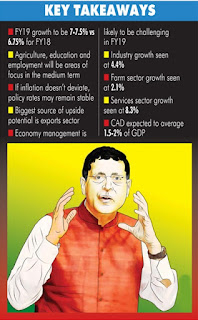 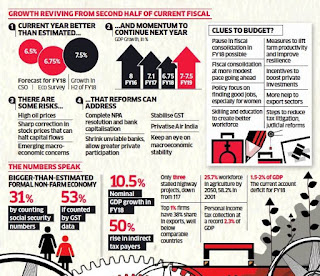 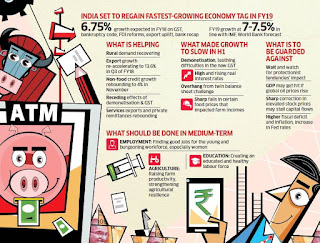 The Economic Survey released suggested that the Indian economy was in the pink of health, but was cautious about risk arising from persistent high crude oil prices or a sharp correction in stock markets over the medium term and from climate change over the long run.

The warning on climate change was particularly alarming since it suggested that agricultural incomes could drop by as much as a quarter if global warming isn’t checked in time.

It also called for a focus on creating jobs, revamping education and raising farm productivity, identifying these as the key challenges in the medium term.

While being generally laudatory of government policies, there were some nuances in the prescriptive elements of the budget that could be read as a slight shift in stance. For instance, while extolling the benefits of demonetisation, the survey maintained that carrots rather than sticks should be the mainstay of government policy in cleaning up the economy.

Similarly, at a time when North Block sees recapitalisation of public sector banks as the solution to the problem of bad corporate debt, the survey warned that the practice of bank recapitalisation and of state governments taking on the debt of power distribution companies need to be halted.

Showcasing the GST Council as a unique model of cooperative federalism, it appealed for extending this model to settling inter-state water disputes and to creating pan-India markets for farm produce and electricity. It also called for states and municipal bodies to do more in terms of raising tax revenues of their own.

The survey allocated an entire chapter to detailing the benefits of GST in terms of widening the tax base, including through voluntary compliance. It also mined GST data to highlight that the informal sector did not quite dominate the non-farm economy to the extent generally believed.

Noting that gender discrimination in India had gone down in 14 out of 17 parameters in the last 10-15 years, the survey said that the correlation with increasing wealth was more significant in India than in most other countries. Hence, it observed, there was good reason to be optimistic about further improvements as the economy hits a high growth path.