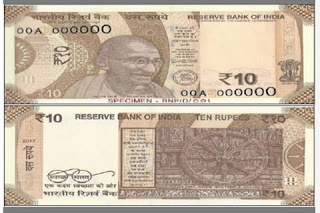 The RBI has come out with a new design and chocolate-brown coloured Rs10-note. The bill will have the same height of 63 mm but the width will be 123 mm — slightly lesser than the existing width of 137 mm.

Besides the colour and the size, another difference is that the reverse of the bill will carry a motif of the Konark Sun Temple. The existing Rs.10-note carries the image of Indian fauna — rhinoceros, elephant and tiger.

The central bank said that it would be putting out the new note into circulation bearing the signature of RBI governor Urjit Patel soon. The bill has other designs and geometric patterns aligning with the overall colour scheme, both at the obverse and reverse. Existing banknotes in the denomination of Rs.10 will continue to be legal tender.

Other featuresof the new bill include a see-through register with denominational numeral 10, written also in Devanagari script, and a portrait of Mahatma Gandhi at the centre. The new note will continue to have windowed de-metalised security thread with inscriptions Bharat (in Devanagri).

Like the other new-series notes, the Rs.10-bill will have the year of its printing on the left, the ‘Swachh Bharat’ logo with its slogan, and a language panel. These notes are expected to be put into circulation by the RBI and lenders through their branches.