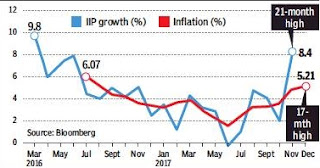 Industrial output growth raced to a near two-year high in November, powered by a robust manufacturing sector, while retail inflation soared to a 17-month high in December on the back of sticky food and fuel prices, dashing hopes of an immediate interest rate cut by the Reserve Bank of India.

Industrial output grew an annual 8.4% in November, sharply higher than the downwardly revised 2% in the previous month and 5.1% a year ago.

The manufacturing sector rose an impressive 10.2% in November compared with 4% in November 2016 while the capital goods sector, which is seen as a key gauge of industrial activity, rose an annual 9.4% in November, higher than the 5.3% posted in the year earlier period.

Some economists, however, said the November data should be read with caution.

The numbers indicate that the industrial sector may be shrugging off the impact of demonetisation and GST rollout issues. If the momentum continues, it augurs well for overall economic growth and will result in an investment pick up in the months ahead. But a sudden surge in demand will also put further pressure on prices. 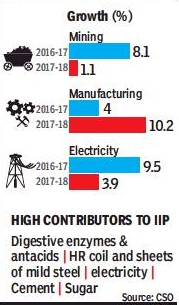