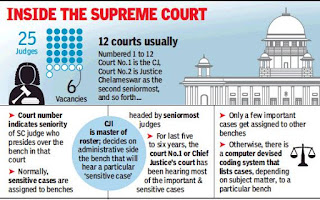 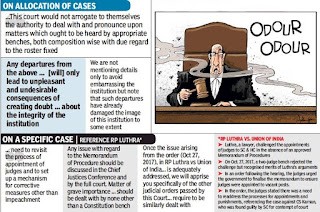 In an unprecedented and dramatic turn of events, four seniormost Supreme Court judges publicly critiqued the Chief Justice of India, Dipak Misra, saying “the administration of the court is not in order” and “efforts to persuade CJI to take remedial measures (have) failed”.

The judges also said that although the CJI “is first among equals” in the Supreme Court, assignment of cases needs to follow “well-settled conventions” and that the CJI doesn’t have “superior authority…legal or factual” over other apex court judges.

The extraordinary development followed an early morning meeting between the CJI and the four judges — Justices J Chelameswar, Ranjan Gogoi, Madan B Lokur and Kurian Joseph, all members of the top court collegium — that the judges said did not yield a satisfactory result.

Addressing a press conference, the judges said: “Democracy will not survive if judiciary is not impartial, and this is an extraordinary event and it is with no pleasure we are doing this...We are left with no choice but to address the nation…The four of us are convinced that unless this institution is preserved and it maintains its equanimity, democracy will not survive in this country…we are compelled to call a press conference.”

The four judges released a letter detailing their critique of the CJI. The strongly worded letter said, “There have been instances where cases having far-reaching consequences for the nation and the institution had been assigned by the Chief Justices of this court selectively to the benches of their preferences without any rational basis for such assignment.”

The missive also said: “Certain judicial orders passed by this court has adversely affected the overall functioning of the justice delivery system and the independence of the high courts besides impacting the administrative functioning of the office of the Hon’ble Chief Justice of India.”

Responding to a question at the press conference on whether the judges’ critique was in part provoked by the case on CBI Judge BH Loya’s death, Justice Gogoi said, “Yes…assignment of a case (to Court No 10 to a bench of Justices Arun Mishra and MM Shantanagoudar) about Judge Loya.”
Judge Loya, who was hearing the Sohrabuddin Sheikh fake encounter case, had died in 2014. A PIL on the matter is currently being heard in the apex court.

Justice Chelameswar said: “All four of us met CJI today with a specific request, we made a request that a particular thing is not in order…the administration of the SC is not in order and many things which are less than desirable have happened in last few months.”

People familiar with the matter said that at the meeting, the CJI and the four judges failed to reach a consensus on whether the Judge Loya case should be transferred to another bench.

The letter also raised the so-called memorandum of procedure (MoP) issue. The MoP refers to the procedure to be adopted for appointing judges to higher courts. The judges said the CJI should have dealt with the MoP matter via a Constitution Bench or the full court, since this “is a matter of great importance”.

A two-judge bench of Justices Adarsh Goel and Uday Lalit had last October passed an order seeking the government’s explanation over the delay in finalisation of the MoP.

The four judges’ letter said: “When the memorandum of procedure was the subject of a decision of a Constitution Bench of the court in Supreme Court Advocates-on-Record Association and Anr. Vs Union of India [(2016) 5SCC 1] it is difficult to understand as to how any other bench could have dealt with the matter...There was, therefore, no occasion for the bench to make any observation with regard to the finalisation of the memorandum of procedure or that that issue cannot linger on for an indefinite period.” However, on November 8, CJI Dipak Misra recalled the order passed on October 27 by the bench of Justices Goel and Lalit, seeking the government’s explanation over the delay in finalisation of the memorandum of procedure.

“The Hon’ble Chief Justice of India is duty bound to rectify the situation and take appropriate remedial measures after a full discussion with the other members of the collegium and at a later stage, if required, with other Hon’ble Judges of this Court,” the judges’ letter said. The letter ended with a caution: “Once the issue arising from the order dated 27th October, 2017, in RP Luthra vs Union of India, mentioned above, is adequately addressed by you and it becomes so necessary we will apprise you specifically of the other judicial orders passed by this court which would require to be similarly dealt with.”