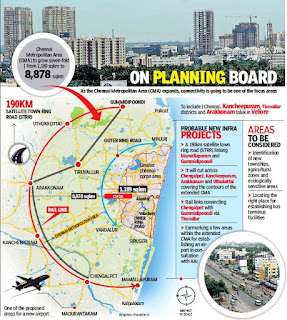 The government is likely to notify the proposal to expand Chennai Metropolitan Area seven-fold from 1,189 sq.km. to 8,878 sq.km., including parts of Kancheepuram and Tiruvallur districts and Vellore’s Arakkonam taluk, making it the country’s second largest urban agglomeration after the National Capital Region (46,208 sq.km.).

A housing and urban development department official said that the government would seek public comments on the extension, meant to give infrastructure a fillip and provide uniform and regulated urban development under a single planning body Chennai Metropolitan Development Authority.

Greater Mumbai Metropolitan Region (4,355 sq.km.) will be seventh, though, with 20.80 million people, it ranks second only to NCR (46.05 million) in population.

The government will give people two months to make suggestions on the expansion, the official said, before hurrying to plan infrastructure and transportation services and identify townships, agricultural zones and eco-sensitive areas.

Connectivity would be one of the thrust areas of the extended CMA as the government gears up to seek public comments regarding the expansion. The extended metropolis is likely to have areas earmarked for infrastructure projects such as a new airport, rail links and highways.

Even as a proposal for developing a greenfield airport at Sriperumbudur was dropped last year, there are reports that the government was considering a few other sites, including Madurantakam in Kancheepuram district, for the purpose.

As part of the plan, the CMDA will consider a report of a study (Chennai Comprehensive Transportation Study) prepared by a consultant in 2010. It was designed to provide parameters for the long-term development of transport infrastructure for the next two decades.

It had suggested building a satellite town ring road linking Mamallapuram and Gummidipoondi. The 190-km road would cut across Chengalpet, Kancheepuram, Arakkonam and Uthukottai covering the contours of the extended CMA. It also emphasised the need for a railway connectivity running almost parallel to the STRR between Chengalpet and Gummidipoondi via Tiruvallur. “The objective behind having yet another ring road and new railway lines is to develop these areas as investment destinations and decongest the city,” said an official, who is privy to the development.

Urban planners insist that promoting public transport should be the priority. “The core focus must be on the mass rapid transit system and not on promoting private modes of transportation. Else, it would again end up building flyovers to resolve the traffic bottlenecks,” said urban designer Advait Jani.