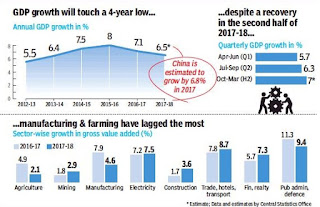 India's economy is estimated to slow to a four-year low of 6.5% in 2017-18, dragged down by sluggish manufacturing and farm sectors and the impact of roll-out issues linked to the Goods & Services Tax and demonetisation on businesses. However, most economists said they expect the number to be revised upwards as the second half of the fiscal year is expected to fare better.

Growth slowed to three-year low of 5.7% in the April-June quarter of FY18, hit by the impact of demonetisation and GST rollout issues but recovered to 6.3% in the July-September quarter. Since then a spate of data and estimates by multilateral agencies have showed that the economy has shrugged off the impact of the twin shocks and is poised to post good growth in the months ahead.

“Implicit calculation suggests H2 FY18 growth will be 7%,” chief statistician T C A Anant told a news conference as he presented an analysis of the first advance estimates of national income for 2017-18.

“GDP growth of 6.5% for 2017-18 implies growth of 7% for the second half. Confirms strong turnaround of economy. Investment growth of almost twice of last year’s indicate investment reviving,” economic affairs secretary Subhas Chandra said on Twitter. Economists said the advance estimates may have been conservative in its assessment.

The latest data comes weeks before the union budget for 2018-19 is presented in Parliament on February 1 and is expected to put pressure on the government to step up spending in key sectors such as the farming.