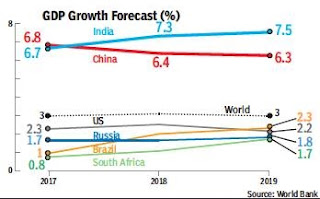 The Indian economy is projected to grow 7.3% in 2018-19 and 7.5% in the medium term on the back of revival of private investment as businesses adjust to the GST, the World Bank has said, regaining the fastest-growing major economy tag from China.

In 2017-18, the economy is forecast to grow 6.7% due to short-term disruptions from the newly introduced GST. The country’s Central Statistics Office estimates the economy to grow 6.5% in 2017-18, marginally below the World Bank projections. The latest projections also showed that India will regain the tag of the fastest growing major economy in the world from China in 2018-19 when China’s economy is estimated to grow 6.4%, slower than India’s 7.3% expansion. China is expected to slow to 6.4% in 2018 from 6.8% in 2017.

“Private investment is expected to revive as the corporate sector adjusts to the GST; infrastructure spending increases, partly to improve public services and internet connectivity; and private sector balance sheet weaknesses are mitigated with the help of the efforts of the government and the Reserve Bank of India,” said the World Bank’s Global Economic Prospects. It said that over the medium term, the GST is expected to benefit economic activity and fiscal sustainability.