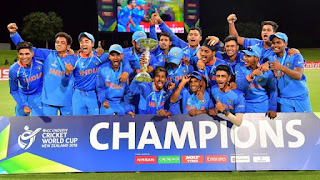 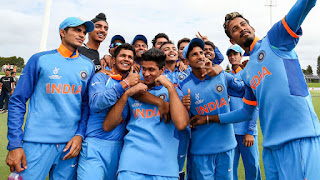 India won its fourth Under-19 Cricket World Cup, and India great Rahul Dravid won his first World Cup (across categories), with the team crushing Australia by eight wickets to cap an unbeaten run in the tournament.

India cruised through the match, after bowling the Australians out for 216.

The win proves that India has a healthy pipeline of future cricketing talent – the Indian senior team’s captain, Virat Kohli, was captain of the team that won the 2008 U-19 World Cup – and that Rahul Dravid has lived up to expectations of being an excellent coach. Not surprisingly, Twitter exploded with calls for his eventual ascension to the job of coach of the senior team, although it remains to be seen whether Dravid will even want a job which is as political as that one.

In the final, opening batsman Manjot Kalra completed an unbeaten 101, a milestone that came just before India’s win, even as his teammates lined up on the boundary to begin celebrations. There was a minor scramble for stumps, with 15 young men vying for six sticks.

Dravid took over as U-19 and India A coach in 2015. His stamp has been clear from the build-up – from insisting that players get a feel of first-class cricket to sorting out their technique.

India kicked off the campaign three weeks ago with a 100-run win over three-times Australia. And the Prithvi Shaw-led team maintained the same ruthless approach till the end.

This new-age Indian team has confounded opposition with a potent pace attack led by Kamlesh Nagarkoti, a robust top-order where Shubman Gill has been outstanding, and several sharp fielders. On Saturday, India dismissed Australia for 216 in 47.2 overs after Jason Sangha, the opposition’s captain of Indian origin, chose to bat. India coasted to 220/2 with 67 balls to spare.

Reaching New Zealand two weeks in advance, the team was acclimatized by the time the tournament began. India’s margin of victories in its matches speak of the team’s dominance: