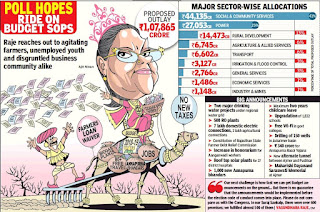 Whatever her merits as an economist, there is no denying that chief minister Vasundhara Raje is a seasoned politician. The last Budget of her second tenure as CM amply reflected this fact. With her eyes firmly on state assembly elections slated for later this year – and having absorbed some lessons from the drubbing her party suffered in the recently held bypolls – the CM sought to reach out to agitating farmers, unemployed youth and the disgruntled business community alike.

Raje proposed a one-time loan waiver of up to Rs.50,000 for small and marginal farmers in the state which, she said, would cost Rs.8,000 crore to the exchequer and benefit 20 lakh farmers. However, the loan waiver scheme would only benefit those who have taken loans from cooperative banks. Interestingly, only Rs.2,000 crore has been set aside in the budget for the loan waiver scheme, indicating that the burden on the state could end up being much less than the Rs.8,000 crore mentioned by the CM.

Raje also proposed to recruit 1.8 lakh people in government departments, though the Budget did not focus much on tourism and transport, two of the major avenues for providing large-scale livelihood opportunities to people in the state. “We have tried to touch every aspect of farmers’ issues and moved on to infrastructure, students, young, old and ‘divyang’ (specially-abled persons), industry, education, health and social areas. We are happy that we have still remained within the FRBM (fiscal responsibility and budget management) limits,” said Raje at a press briefing after announcing the Budget.

For healthcare – where the state finished just above the bottomplaced Uttar Pradesh in NITI Aayog’s health index announced last week – she proposed to set up a new medical college in Dholpur, 28 new primary healthcare centres and upgrade 16 PHCs to community health centres. But what could be of relief for the manpower-strapped medical administration in the state is the plan to recruit 4,514 nurses and 5,558 women health workers.

The social and community services sector received the largest outlay of 41% in the budget followed by rural development (13%), reflecting the priority of the government in reaching out to the people who matter the most in an election year.

Providing milk thrice a week in mid-day meals to constructing toilets in model schools, recruiting 77,100 new teaching staff and providing free Wi-Fi in government colleges, the chief minister made no bones about her game plan of hoping to reap a rich harvest of votes in the coming elections.