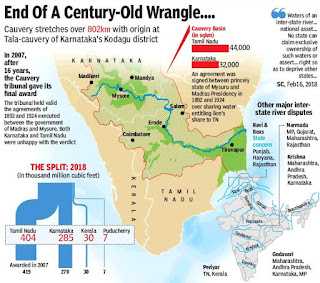 Putting to rest a 126-year-old emotive dispute over the sharing of Cauvery water, the Supreme Court increased Karnataka’s entitlement on Friday by 14.75 tmcft to 284.75 tmcft and reduced Tamil Nadu’s share to 404.25 tmcft while keeping allocations for Kerala and Puducherry unchanged.

Kerala will access 30 tmcft and Puducherry 7 tmcft and the award that now has the SC’s seal can be re-examined only after 15 years, in 2033.

This brings down the curtain on a volatile issue that has roiled Karnataka and Tamil Nadu politics for long while also giving successive governments at the Centre a headache.

A bench of Chief Justice Dipak Misra and Justices Amitava Roy and A M Khanwilkar gave a unanimous verdict making a minor change in the 2007 award of the Cauvery Water Disputes Tribunal, which had, of the total available 740 thousand million cubic feet of water, allotted Tamil Nadu 419 tmcft, Karnataka 270 tmcft, Kerala 30 tmcft and Puducherry 7 tmcft, while keeping aside 10 tmcft for environment protection and 4 tmcft as inevitable discharge into sea.

Authoring the judgment, CJI Misra said the share of Karnataka was increased by 14.75 tmcft because the CWDT had not taken into account two crucial factors — the availability of 10tmcft groundwater to Tamil Nadu from the Cauvery basin and 4.75 tmcft of water required to satiate the drinking water requirements of residents of Bengaluru, a city with “global status”. 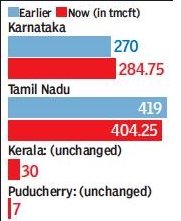