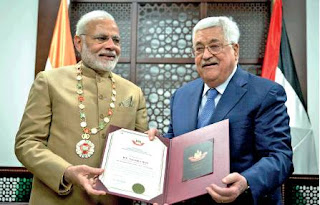 Prime Minister Narendra Modi met Mahmoud Abbas on a historic visit to Palestine during which the Palestinian President sought India’s support for a multi-country mechanism to achieve a “just and desired peace”” with Israel in accordance with the two-state solution. President Abbas accorded a red carpet welcome to Modi, the first Indian Prime Minister to make an official visit to Palestine, in an official ceremony at the presidential compound, also known as Muqata’a, in Ramallah - the Palestinian seat of government.

They discussed the full range of India-Palestine ties following which the two sides signed six agreements worth around $50 million that includes setting up of a $30 million super speciality hospital in Beit Sahur. Three agreements in the education sector worth USD 5 million, one MoU for procurement of equipment and machinery for the National Printing Press and one for construction of a centre for empowering women were also signed.

Modi assured President Abbas that India is committed to the Palestinian people’s interests. “Friendship between India and Palestine has stood the test of time. The people of Palestine have shown remarkable courage in the face of several challenges. India will always support Palestine’s development journey,” Modi said, adding that India hopes for Palestine to soon become a sovereign and independent country in a peaceful environment through dialogue.