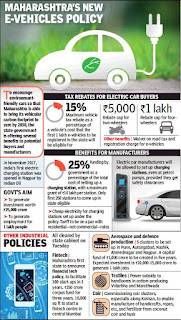 The Maharashtra cabinet cleared the much-awaited electric vehicles policy for the state to encourage the manufacture and use of green vehicles. Under the policy, the industries department has offered tax concessions to buyers and part-funding to manufacturers to set up charging points. It was one of nine industrial policies cleared. The other major ones include policies on financial tech to facilitate startups, on aerospace and defence production, and on textiles.

The biggest issue the e-vehicles policy addresses is that of charging stations. Electricity rates for them will be on a par with residential tariffs, and not commercial ones. Vehicle companies will be able to set up charging stations even at petrol pumps after all safety norms are followed. “We have also given a subsidy. The government will fund 25% of the investment, with a maximum of Rs.10 lakh per charging station, on the first 250 stations in the state,” an official said. “We have studied similar policies elsewhere, especially in other countries, and adopted best practices.”

Meanwhile, in a rare policy extension, the government has announced a waiver of road tax and registration charges for e-vehicles in the state and also a 15% tax rebate for the first one lakh vehicles to be registered. For two-wheelers the cap for the rebate is Rs.5,000, for three-wheelers Rs.12,000 and for four-wheelers Rs.1 lakh. Three months from the purchase date, the rebate will be reverted in the account of the person in whose name the vehicle will be registered.

With the policy, the state government hopes to generate an investment of Rs.25,000 crore and employment for one lakh people.

An official from Maharashtra’s industries department said the policy has been designed to push a switch to electric vehicles by 2030. “We are giving incentives at the manufacturing level as well as at the consumer level to create a buying atmosphere for electric vehicles.”

An official said the move was made to create a “favourable policy environment” for all upcoming sectors before the ambitious Magnetic Maharashtra summit, to be held in Mumbai from February 18 onwards to attract investors.

Another major industrial policy cleared is the fintech policy. Maharashtra is the first state in the country to announce it. The policy will facilitate the formation of 300 start-ups in the state in the next three years, for which a corpus fund of at least Rs.250 crore will be made. The government will also start a fintech centre, for which extra FSI has been announced. For a fintech start-up with an annual turnover of up to Rs.25 crore, Rs.10 lakh per annum will be approved as investment for three years. This will include reimbursement of internet and electricity consumption, infrastructure subsidies, reimbursement of state and central service taxes, and reimbursement of participation fees.

Also cleared was a logistics park policy, under which designated areas will be called logistics parks and concessions given for handling raw materials meant for supply to industrial units.