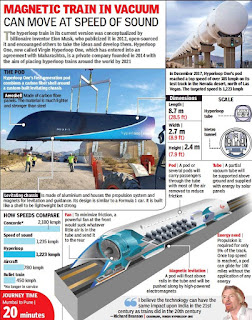 A US-based firm developing a near-supersonic mode of onground passenger travel signed an ‘intent agreement’ with Maharashtra to build a transport system between Mumbai and Pune which aims to bring down travel time between the two cities to 20 minutes from three hours. Virgin Hyperloop One’s chairman Richard Branson, who is in Mumbai for the Magnetic Maharashtra summit, said the route for the hyperloop system will pass through the proposed Navi Mumbai International Airport. The fare is too early to decide, but will probably be close to airfares.

“The hyperloop will reduce accidents. Teams are working to study the feasibility of the route,” Branson said. Officials said the final feasibility study may be completed in six months, and construction of a test track can start in early 2019 and finish by 2021-end. If the tests are successful, it would take about four years to build the entire Mumbai-Navi Mumbai-Pune track.

The estimated cost of the route is around Rs.20,000 crore, which officials say works out cheaper than other forms of high-speed on-ground travel.

“Individual ports of the loop will go inside individual gates of the (proposed) airport, reducing travel time further. The project will leapfrog Maharashtra into a transport hub,” said Branson. He said the system will have a capacity of 150 million passengers per year (saving more than 90 million hours of travel time), with a potential to reduce greenhouse gases by 150,000 tons a year. Hyperloop is a technology in which a passenger-carrying capsule moves almost at the speed of sound using magnetic levitation through an almost air-less tube. The technology is not yet commercially operational anywhere in the world. “Possibly, India may have this track as the first operationalized route, though Dubai is competing close,” Branson said. “The Pune-Mumbai route is an ideal first corridor as part of a national hyperloop network.”

VHO CEO Rob Lloyd said, “We have always believed that India would be a tremendous market for the hyperloop. The Pune-Mumbai route is one of the strongest economic cases we have seen to date.”

Officials said that under the agreement, the company will also look at potential routes and undertake preliminary studies to analyze the economic impact and technical viability of hyperloop transportation in India. The US-based company signed the Maharashtra agreement in the presence of Prime Minister Narendra Modi and chief minister Devendra Fadnavis. Apart from Branson, also present were VHO investors Sultan Ahmed bin Sulayem (CEO and group chairman of DP World), and Ziyavudin Magomedov (chairman of Summa Group).

“With VHO, we can create sustainable infrastructure that will enhance Maharashtra's competitiveness and attract new investment and businesses,” said Fadnavis. “The Pune-Mumbai hyperloop route will be an economic catalyst for the region and create tens of thousands of jobs for India’s world class manufacturing, construction, service, and IT sectors, and aligns with the Make in India initiatives.” 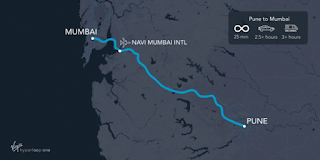