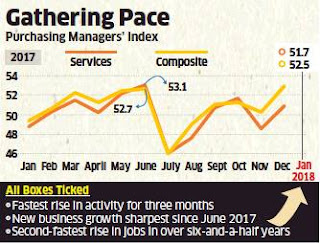 A recovery in new orders propelled the services sector to its fastest growth in three months in January. Job creation accelerated to the second strongest in more than six and a half years.

The Nikkei/IHS Markit Services Purchasing Managers’ Index rose to 51.7 in January from 50.9 in December, above the 50 mark that separates growth from contraction.

The volume of new business received by India’s services sector companies rose in January, after remaining unchanged in the previous month. The pace of expansion was the fastest since June last year, but below the trend level since the series began in December 2005.

A sister survey showed manufacturing PMI slowed to a three-month low in January. The composite PMI, which tracks both manufacturing and services businesses, fell to 52.5 from 53.0 in December.

The rate of job creation was the fastest since last September.

In terms of prices, input cost inflation across services sector remained weak by historical standards, although service providers were able to pass on a greater proportion of cost burdens to customers.

While job creation accelerated to second strongest in over six and a half years, as firms struggled in receiving timely payments, GST continued to be a key constraint to businesses and services sector remained a laggard relative to its manufacturing counterpart.