Sensex has gained 30% since last Budget 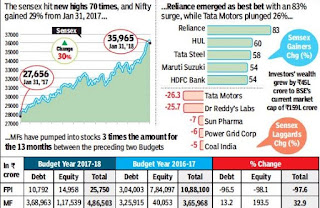 If one looks at the performance of sensex, Nifty and top stocks on Dalal Street since the last Budget exactly a year ago, the numbers will surely impress. The sensex is up around 30% since then to a record high of around 36,000, it has hit new highs on more than 70 occasions, and investors are richer by nearly Rs.45 lakh crore (or about $700 billion) with BSE’s market capitalisation now at nearly Rs.160 lakh crore, also an all-time peak.

What could impress more and also give a lot of comfort to the government and policymakers is the fact that this smart rally came mainly on the back of strong buying by retail investors through domestic mutual funds. Since the last Budget, mutual funds have pumped close to Rs.1.2 lakh crore into stocks — almost three times the corresponding number over the 13-month period between Budget 2016-17 and Budget 2017-18 (for FY17, the Budget was presented on February 29, while since then the date has been advanced to February 1). In comparison, net fund infusion by foreign investors — who were the most dominant investor group in India for nearly a quarter of a century — was just a trickle at nearly Rs.15,000 crore (or $2.3 billion).

With retail investors lapping up the SIP in mutual fund schemes as their preferred route to invest in the stock market, fund managers and brokers believe that India’s long cherished dream of having a credible counter-balance to foreign funds is firmly in place.

Investors are putting over Rs.6,200 crore into mutual funds through SIPs every month and industry estimates say 95% of this is intended for investing in equities.

If the current trend is maintained, very soon Indian investors will be investing over $1 billion (Rs.6,500 crore) in stocks every month, which could rise to over Rs.10,000 crore in about two years.  In January 2017, this number was at Rs.4,095 crore, thus recording a growth rate of over 50% since finance minister Arun Jaitley’s last Budget.

One of the main reasons for this huge growth in SIP inflows is what market players describe as the ‘financialisation of savings and investments’ due to demonetisation, which is getting a further boost by introduction of GST.

These two reform-oriented moves by the government are prompting investors to shift from buying gold and real estate to investing in mutual funds, stocks and other financial products.

Dalal Street veterans now expect the FM to give a further boost to financial savings by putting more money into the hands of salaried people and also plugging loopholes which could turn the stock and commodity markets into a much safer place to invest and trade.