PNB hit by a massive scam 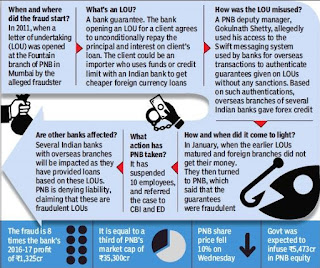 The Punjab National Bank yesterday reported a scam of around Rs.11,400 crore where city based billionaire jeweller Nirav Modi allegedly acquired fraudulent letters of undertaking from the bank’s one of the branches in Mumbai to secure overseas credit from other Indian banks. The PNB has suspended 10 officers and referred the matter to the Central Bureau of Investigation.

In its regulatory filing, the PNB – India’s second-biggest state-run bank – said it detected “fraudulent and unauthorised transactions in one of its branches in Mumbai for the benefit of a few select account holders”. The bank further said that based on these transactions, other banks appeared to have advanced money to these customers abroad. While PNB did not name the other lenders, the Press Trust of India reported that Union Bank of India, Allahabad Bank, and Axis Bank are said to have offered credit based on letters of undertaking issued by PNB. A letter of undertaking is also called a ‘letter of comfort’, issued by one bank to other banks, based on which foreign branches offer credit to buyers.

Last week, PNB had filed a complaint with the CBI stating that fraudulent letters of undertaking, worth Rs.280.7 crore, were first issued on January 16. At the time, PNB had said it was digging into records to examine the magnitude of the fraud. In the complaint, PNB named three diamond firms -- Diamonds R Us, Solar Exports and Stellar Diamonds -- saying they approached it on Jan 16 with a request for buyers’ credit for making payment to overseas suppliers.

The bank sought 100% cash margins for issuing letters of undertaking for raising buyers’ credit, which was contested by the firms saying they had availed of the facility from as early as 2010. Nirav Modi, his wife Ami, brother Nishal, and Mehul Choksi are partners in Diamonds R US, Solar Exports and Stellar Diamonds, which has shops in Hong Kong, Dubai, and New York.

Among those suspended by the PNB is deputy manager Gokulnath Shetty, who was posted at PNB’s foreign exchange department in Mumbai since March 31, 2010. He had allegedly, along with another official Manoj Kharat, fraudulently issued letters of undertaking to these firms without following procedure or making entries in the banking system, avoiding detection of transactions.

The bank is assessing whether claims arising out of letters of undertaking are legally binding. A partner in a Mumbai-based auditing firm, which had earlier audited PNB’s accounts books, said the fraud must have been detected following claims by other banks on loans taken on the basis of PNB’s letters of undertaking.

“Whether letters of undertaking are binding on the bank like letter of credit or a bank guarantee is a matter of legal interpretation and that’s the reason the PNB, in its communique to the stock exchanges on Wednesday, said liability arising out of it was “contingent in nature”, the auditor said.

The fraud has come to light at a time when the Central government is scheduled to bonds worth Rs.5,473 crore as part of its plan to recapitalise nationalised banks that are facing problems due to non-performing assets and unpaid loans. A leading chartered accountant said in this case, even if 50% of the loans are not paid, the entire recapitalisation amount received from the Centre “will get wiped out”.