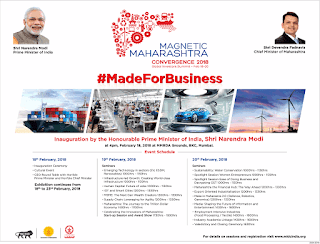 At the first-ever global investment summit to be held in the state, Magnetic Maharashtra: Convergence 2018, chief minister Devendra Fadnavis expects an investment of more than Rs.10 lakh crore .

“Make-in-India was organized by the Centre in February 2016 and we were the co-host. Now, we are organizing Magnetic Maharashtra, which is our own event to establish Maharashtra as a destination for global investors. Prime Minister Narendra Modi will inaugurate the summit on February 18,” Fadnavis said.

Calling the Make In India summit a huge success, Fadnavis said that out of the promised Rs.8 lakh crore investments, the state received investments worth Rs.4.09 lakh, 65% of the 2,984 MoUs have been converted into reality and there has been a 75% job generation since then. “We are on the verge of setting a new record in terms of domestic and foreign direct investments,” he added.

A high-ranking bureaucrat said that the state is likely to sign nearly 5,000 MoUs, with an investment of Rs 10 lakh crore which will generate employment for 35 lakh people.

The bureaucrat said an investment of Rs 3 lakh crore is expected from a petroleum refinery in Ratnagiri. It will be a first of its kind unit, which will come in collaboration with state-run petroleum corporations. “The refinery is expected to create jobs for 8 lakh people on 12,000 acres of land. It will be world’s biggest petroleum project,” he said.

An investment of Rs 3.8 lakh is expected in the affordable housing section too. It has been proposed to construct 16 lakh affordable houses across the state and the project has an employment potential of 29 lakh. Credai-Maharashtra, National Real Estate Development Corporation, Maharashtra Chamber of Housing and Industry, Khaleeji Commercial bank, Poddar Housing, Mangal Namoh and Sun Pharmaceutical are among the groups which will construct affordable houses.

The bureaucrat said Fadnavis will unveil at least seven new policies which will encourage sectors like defence, e-automobile, textile, coir, logistics, start-ups and women entrepreneurship. “While there is huge budget for defence production, most items are imported. We will encourage entrepreneurs to manufacture these products in Maharashtra,” he said.

During the three-day event, the PM will also have round table conference with CEOs in presence of the CM. Fadnavis is expected to present the government’s proposed investments as well like Rs 40,000 crore for coastal Road, Rs 42,000 crore for the Nagpur-Mumbai Super Expressway, besides in Metro projects in Pune, Mumbai and Nagpur and the Navi Mumbai airport.

There will be sessions on emerging technologies, future of jobs, creating world-class infra, export-oriented industrialization, water conservation, Mumbai the financial hub–the way ahead and a spotlight session on women entrepreneurs.

After chasing Foxconn, the Taiwan-based electronic equipment manufacturer, for nearly two years, Maharashtra has finally said it will not pursue the company for investments.

After Foxconn signed an MoU with the state in 2015, offering an investment of $5 billion, CM Devendra Fadnavis had flagged it as an achievement of his government and said it would generate 50,000 direct jobs. Foxconn’s chairman Terry Gou was present when the MoU was signed. Foxconn manufactures gadgets for world’s leading electronic brands, including Apple, Huawei, Xiaomi, BlackBerry and Motorola. The state had offered it 1,500 acres at Talegaon along the Pune Expressway.

“Foxconn is a manufacturing firm and its decision is based on its clients. They would not share their concerns or plans with us,” said a Mantralaya source. Industry minister Subhash Desai said the government is not interested in pursuing Foxconn. “We have other foreign investors. Last year, we signed 2,984 MoUs worth Rs 8 lakh crore with a projected employment of 30 lakh. Of these, Rs 4.91 lakh crore plans have already materialised,” he said.

Desai said if and when Foxconn decides to invest in the state, it would always be welcome.