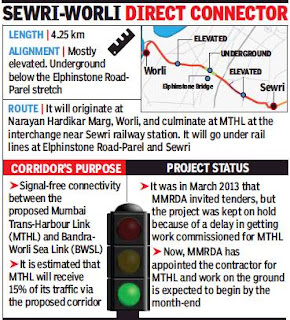 The Sewri-Worli road connector plan, which had been put on hold because of repeated delays in starting the Mumbai Trans-Harbour Link project, has been revived with a change in the original plan. As against a completely overhead bridge between Sewri and Worli, the portion across the Elphinstone Road-Parel stretch will be underground.

The 2+2 lane connector is estimated to handle around 15% of the MTHL’s expected traffic. MMRDA has appointed the contractor for the MTHL and work is expected to begin before the end of the month. The connector, once built, will provide signal-free connectivity between MTHL and the Bandra-Worli Sea Link.

Metropolitan commissioner UPS Madan said, “We have decided to build the connector with a slight change in design.”

The overhead portion of the connector would be built at a height of 27m. Madan said, “There will be practical problems in executing the stretch at that height on the railway stretch. Also, it takes a lot of time for a design to be approved by the railways. Hence we have decided to go underground.” The underground stretch is likely to be 500 metres long.

The connector’s high alignment is owing to the presence of flyovers on Dr BR Ambedkar Road and Tulsi Pipe Road. It will originate near the mouth of the MTHL at Sewri, take the Acharya Donde Marg at Parel, before going underground at Parel station, re-emerging above ground, moving towards Prabhadevi, and ending at Narayan-Hardikar Marg at Worli.